Questions and comments can be sent to:
Duke Serkol

I, Introduction and Official Timeline

On December 21, 2011 Nintendo released a book containing the official timeline of the Zelda series. Decades of speculation came to an abrupt end as an official stance on the matter was at long last taken. While this timeline has some severe fallacies, I'm not going to make a stand, I'm hanging my theorizer's hat and posting the timeline here as it is.
Or am I? Well not quite. According to this official timeline, the BS Zelda games would be non-canon spin offs devoid of any significance to the series continuity. That's not gonna fly here on the BS Zelda Homepage, at least not for Ancient Stone Tablets (which clearly isn't a mere what if, having its own plot connected to ALttP and LA).
So here's what I'm going to do: I'm posting the official timeline as said, but below it I'm going to provide the stories of the two BS Zelda games and explain where they would fit within this timeline.
For anyone who might care, below will also be a link to my old storyline section which will remain archived (I'm not throwing it away).

WARNING: Here can be found detailed information on the stories of the BS Zelda games; if you plan on experiencing one of these fantastic games in the future and don't want to spoil its story do not read the relative page! 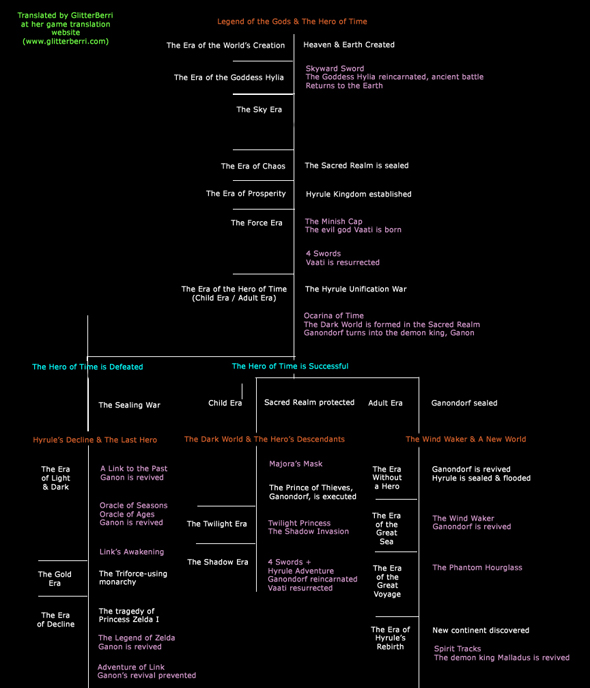 So there's the official timeline. Where do the BS Zelda games fall in?


II, The Stories of the BS Zelda games fit within the Timeline

Placing the original BS Zelda is actually really simple as it is, in fact, a what if scenario based on the first Zelda game for the NES (near the end of the branch labeled "Hyrule's Decline & The Last Hero"). The premise is, specifically, "What if, instead of Impa finding Link, a hero came from another dimension (possibly ours) to save Hyrule?"

Now according to Hyrule Historia, this what if scenario is not canon and of course it can't happen within the same timeline as the first Zelda game (since they both tell the same story, albeit with a different spin on it).
But if we wanted to fit the game within the established canon, we could easily make it so by supposing that the timeline splits again before the first NES game, with the former happening on one branch and BS Zelda occurring in the other.
Such a split could be caused by something occurring during Oracle of Ages since time gets rewritten several times in that game (it really isn't important what specifically causes each branch to occur), so that in one timeline Impa is able to find Link and he goes on to reunite the Triforce defeat Ganon and save Zelda, while in the other Link is not able to do so and another hero is guided to Hyrule from another world by the stars (one may wonder what became of Link in this timeline. There is of course no definitive answer, maybe Impa never found him, maybe he died or perhaps he wasn't born at all).


The story of BS The Legend of Zelda

Moving on then to BS Zelda Ancient Stone Tablets, as said this one actually has its own story but when does it occur? Again, this is a fairly simple question to answer: AST happens six years after A Link to the Past, supposedly at the same time as Link's Awakening (once again then, the game takes place on the branch labeled "Hyrule's Decline & The Last Hero", earlier on than the other BS Zelda).
Link has left Hyrule (as described in Link's Awakening's manual) but a new peril is about to arise in the land. Fortunately, as in the other BS Zelda, a hero from another world (again, possibly ours) appears to save the day.


The story of BS The Legend of Zelda: Ancient Stone Tablets

Even after reading these detailed synopsis, you may be left with some doubts as to how certain things fit with the rest of the series, or even the hows and whys of the BS Zelda games themselves. So to clarify things further...


Here are some Questions and Answers.

After an exchange of ideas with me (Duke Serkol), JoeSteve1914 took it on himself to adapt the official timeline to include in it both BS Zeldas as well as other games not considered canon by Hyrule Historia (click on the image to enlarge): 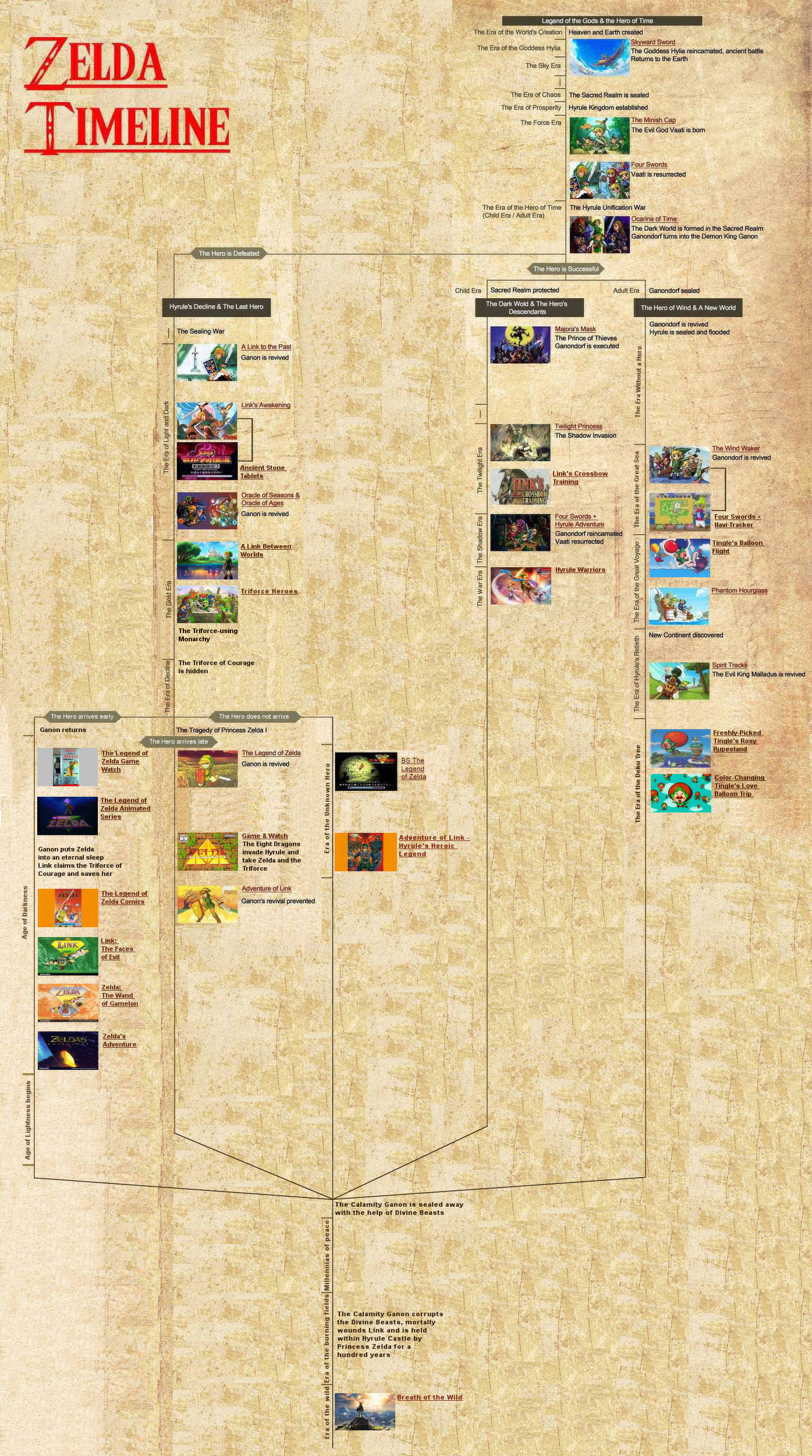 This image by JoeSteve1914 and Duke Serkol (originally by GlitterBerry and x7razorbackx7, edited by Con) shows the adapted timeline that includes all Zelda games

Here you can download a txt file with all the text from the original BS Zelda game translated in English, minus the voice acting which you can find here!

And here is the text dump in both Japanese and English for BS Zelda Ancient Stone Tablets (doc format). And here is a translation of the voice acting.

A, The Archived Storyline Section

Finally, as promised, here is a link to the archived storyline section. Be aware that contained therein are facts mixed up with my personal theories. If you only want official information, then only refer to the timeline from Hyrule Historia and the translation of the details provided concerning each game.
But if you're curious to see what I made of the timeline by studying the games from the release of ALttP up to that of Phantom Hourglass then, by all means, go on ahead.

Over the course of time, different theories have been proposed to explain the placement of the BS Zelda games within the timeline. In the past, to avoid confusion, it was preferred to only present one theory here.
However, now that the majority of the games in the series have been given an official timeline, significantly clearing up things, it seems a good time to let some of these other theories have their share of the spotlights.

So, if you would like to read about a few more possible answers to the question "How would the BS Zelda games fit within continuity?" then check out these: