With all the variations offered you might loose the overview, therefore here are some notes for the prepatched versions and how to patch your own version:

Roto based game variations: It was Roto that released the first major hack. Not only that he made the game completed, he also hacked a menu and increased the fluid gameplay of the game. Most roms that you can download are based on his hack.

MottZilla Project: Roto's patch was hacked for emulation compatibility. Therefore, his menu unfortunately freezes or the rom isn't bootable on specific real hardware devices (check Emulation Compatibility below). MottZilla's project is a complete alternative and hacked from scratch to increase the compatibility. Map 1 and 2 are merged in his project (while they were left separate in patches based on Roto's work).

Each variant (Official/MQ) is divided in 4 weeks. Note that you must rename your srm to the next week's rom name to transfer all progress into the next week (e.g., rename bszelda_ast1.srm into bszelda_ast2.srm manually).

Official versions: The purpose of the official version is to play the games faithful to the original broadcast. We offer a 4 MB and a 2 MB version: the 4 MB has all the latest hacks inside, an intro close to the original and sublines that are there in lieu of the missing voice acting, while the 2 MB versions has only the most necessary stuff to increase compatibility.

Master Quest version: Before we had the videos to be able to insert original indoors, the former version had much harder dungeons. For this reason we made a "Master Quest" out of the former indoors and pre-applied some optional patches to this version as well. You now play without time (have unlimited time since the last minute will loop forever until you collected both tablets and can achieve all items in your menu. Through the stronger bosses, these roms are much harder to complete as well.


C, Your own version

Above listed prepatched variations are our best choices to play both BS Zelda and Ancient Stone Tablets. Upon dowloading a rom you can read in the description which patches were pre-applied. All patches applied are offered as single patches as well, so you are able to patch the native rom from scratch (important patch files)! However, you can also patch your own version by applying any optional patches offered using IPS Win or Lunar IPS; you can for example apply the Link patch to the restoration roms to play as Link instead of the mascot, or apply the timeless or itemfix on Official AST to have no timer or to have a complete menu here as well with magic cape and so forth. 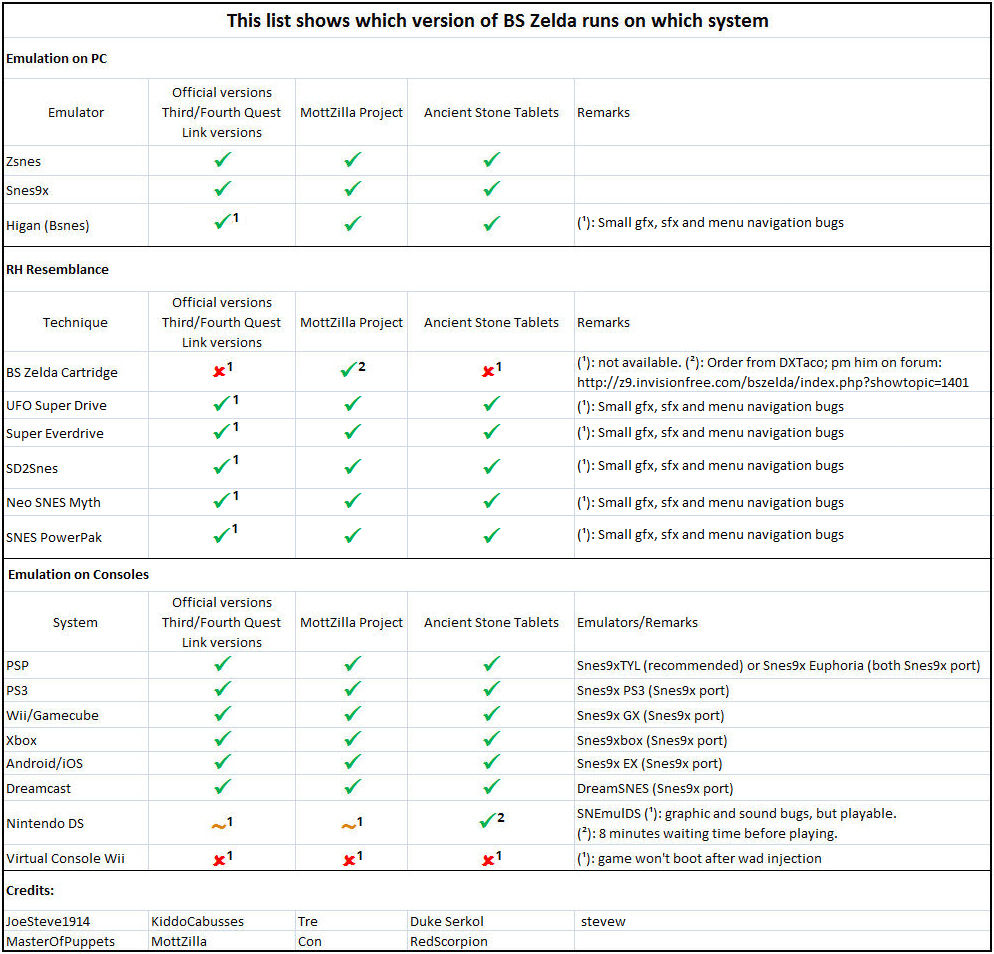 This list shows which version of BS Zelda is compatible with which system. Download the editable Excel Sheet.

This site does NOT, in any way, seek to cause Nintendo any financial losses. The only reason the BS Zelda games are being made available here is because there is currently no way at all to purchase them. Providing cost-free rom emulation of commercially available games damages their makers and the development of further games. The BS Zelda Homepage is not affiliated with any romz/warez pages that distribute commercial games.
To further clarify: the reason we are making these games available to you is because they could only be played in Japan, for a very limited amount of time, via the BS-X add on from St.Giga used to receive the game data from their satellite. St.Giga is (to all information we have) long gone and so you aren't able to play any BS-X games in any way other than emulation. Because they are no longer transmitting BS games, neither St.Giga nor Nintendo are losing potential purchases through the emulation of these games. We are a non-profit fan based page that wants to keep these 16-bit gems alive and therefore spent countless hours of work (hacking, research, etc.) to rescue these exciting games from oblivion. The bottom line is: for Zelda fans emulation is, as of this writing, the only way to play these fantastic, unique and otherwise lost games.


Here is an additional article by the ZHQ regarding emulation of 8-bits and16-bit games. However, Nintendo still makes profit from many of these so-called "dead" games through re-releases and their Virtual Console program; so we, as the staff from the BS-Zelda Homepage, only apply these arguments to games that, like BS Zelda, are in no way commercially available.

To say that the ZHQ staff thought about this matter is underestimating.  Emulation is a very controversial topic, and for quite a while the Zelda HeadQuarters's official position was to avoid emulation. When Steve Fairbanks wrote an editorial called The Illegal Link, pro-emulation fans scorned Steve, that web site, and everyone else standing in their way.  Negative E-Mails coupled with messages on a their board flowed in.  Steve Fairbanks discussed the situation with Niels, and they decided to take another look at the subject and they arrived at the same conclusion, documented in the editorial To Emulate or Not To Emulate. Later on, Adam Lawrence was given a chance to write an article in support of emulation, and he took the opportunity to disagree with some previous editorials over technicalities of legality and so forth.

Finally, on January 13, 1998, the webmaster of the Zelda HeadQuarters made an official proclamation that "Zelda Headquarters is keeping the classics alive"; alive via emulation, and outlined the current policy.

The 8-bit Nintendo Entertainment System (NES) is dead.  Let me help define dead for you.  Nintendo doesn't make any 8-bit NES anymore. Nintendo of America, the only company to have ever produced an officially licenced Nintendo cartridge, doesn't make a single 8-bit NES game anymore. If you go to stores around America, chances are you're not going to find a NES console or catridge for sale.  And even if you do, there's a good chance it's something used (packaged up and sold through a third party), meaning Nintendo doesn't make a dime off it anyway.  The company that brought the unit into mass production basically doesn't care about the NES anymore, and has left the system to be an excellent piece of its history.  The NES made history, and now the NES is history.

Early on in the world of Nintendo emulation (in June 1997), Conrad E-Mailed Nintendo@Nintendo.Com about emulation (as well as other things), and part of Greg Wallace's responce was "Emulators are illegal. Nintendo has an international team of lawyers who pursue manufacturers and distributors of such products. Usually, we are able to shut down such companies extremely quickly..."  However, the emulator in question, as well as many other emulators, continue to exist and get developed.

The truth is emulators are not illegal.  An examples of a 100% completely legal commercial emulator you can run is the Atari 2600 Action Pack (by Activision).  OS/2 emulates EMS for it's DOS sessions.  There's also hardware emulators.  A lot of sound cards used to claim 100% SoundBlaster emulation (nowadays they usually use the word "compatibility"). To better what an emulator is, look at the Super Gameboy (lets you play gameboy games on a Super NES)it works, by most technical definitions, as a hardware-based emulator (whichreads software in the "native" Gameboy format, and converts the Gameboy's output codes into something a Super NES can use).  So Nintendo's statement was really quite inaccurate: If for no other reason than just because it is very unspecific and seems to cover way too much ground.

Nintendo hasn't been too forceful in challenging emulation, and any action the company has taken has pretty much been against Super NES related emulation(and illegal distribution of Super NES games).  The company hasn't explicitly given anybody legal permission to distribute copies of the 8-bit games.  Similar issues (namely over DeHacked, the illegal DOOM editor)has shown that sometimes a company doesn't give out permission to have their copyright infringed because if they actually gave out permission they might lose some legal rights over their work.  Nintendo seems to be strangely silent at times about discussions regarding emulation when the topic is limitedto an 8-bit NES, just as they don't seem to pursue the copyright infringement of using their graphics in a non-commercial production (such as screen shots using copyrited sprites being shown on a web page).

So, instead of pushing for an answer (which might result in Nintendo's easiest option becoming vocalizing a loud "NO!" just to shut us up), Zelda Headquarters has decided to use discretion and support some emulation which we believe will do nothing but increase interest in a couple of games which Nintendo published.  ZHQ supports emulation of a NES, as well as the8-bit NES games.  However, emulation of any other Nintendo system is not supported and is in fact discouraged, due to the fact that systems (and the Zelda-series games for those systems, if you look hard enough) are still sitting on many store shelves hoping to receive your dollars.

Will the Zelda Headquarters ever support emulation of a later Nintendo system? Probably someday.  The Super NES is losing market share as developers(including Nintendo) and gamers alike are switching over to other platforms.  The SNES probably has a year or two left during which new SNES games will be made.  The SNES is not dead yet, although surely the 16-bit technology will someday be unmarketable.  Perhaps after a year or two into the next millennium you'll see ZHQ supporting SNES emulation.  That's assuming there are no legal, commercial SNES emulators(such as an addon for the N64 to play the older games).  First we need to wait for the SNES to not receive any new updates (including new games). Second, there needs to be some time that passes (because we don't want emulation to help drive a system to an early grave).

There's no way right now to tell when the N64 will become unmarketable, because we don't know exactly how much expandability the N64 will exploit.  (Had the SNES gone through with a CD-ROM addon unit, it's estimated product life would probably be longer than what it is today.) Consequently, we don't even know when ZHQ will ever support Nintendo 64 emulation under this policy, but suffice it to say that it's quite a ways off.  (Consider this: ZHQ didn't support NES emulation until more than a dozen years after the first Zelda game appeared for that system.)

To conclude, the Zelda Headquarters emulation policy supports only systems which have been dead in the market place for a significant period of time.

Considering most BS-X games could be played only for a few hours, the subject is very similar. Also this is a non-profit site. If Nintendo asks for the roms to be removed, we will very willingly do so.