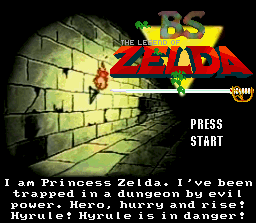 
- MSU-1 (choose your desired way of playing):
- Check the subfolder "optional patches" for more optional patches!
- Optionally, you can apply Waitsign and Fortune Teller spc patch by Con, wiiqwertyuiop, FirebrandX, Dehadin, Plasma Captain, DJ Emergency and Trovsky to have the old man theme played during the waitsigns and the Fortune Teller theme played during old man intro text slide. This spc patch must be preapplied before you can use the optional: MSU-1 patch (by Con)

This patch makes the game closer to the original broadcast.
Mainly, this patch makess the week skips time related (not triforce related as in Roto's patch). Check the subfolder in the patch file for single patches!)
Apply this patch AFTER Roto's Complete and DN's Upgrade patch!
Do NOT use this patch together with the TQ-loz or decoration patch below! 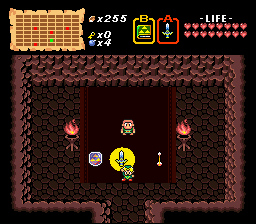 Most of the ingame time related events are stabled, so you can play the game like a regular Legend of Zelda! Check the subfolder in the patch file for single patches!
Apply this patch AFTER Roto's Complete and DN's Upgrade patch!
Do NOT use this patch with the restoration patch above or the decoration patch below! 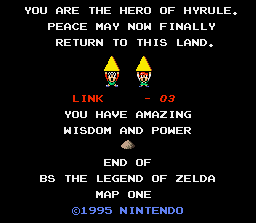 Apply this patch AFTER Roto's Complete and DN's Upgrade patch!
Do NOT use this patch with the restoration patch or the TQ-loz patch above! 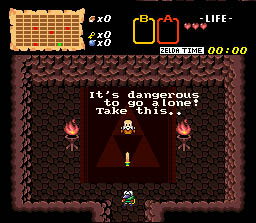 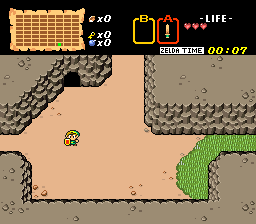 2, Here are two patches to replace the BS-X boy avatar with the official Link sprite that was made during the game's early development.

The BS Zelda Original Link Restoration Patch by Duke Serkol and Con changes the
- BS-X boy avatar to the Link sprite made by Nintendo.
The goal of this patch is to restore the sprite with as minimal changes to the rest of the game as possible. Unfortunately, modifying the palette to match what was intended for the Link sprite does have some effects on other sprites (the girl avatar, which was replaced, a different shade of hair color for the merchant and, much less noticeably on Zelda).

Conversely, there's Asaki's BS Zelda - Link Restoration v1.1 patch which changes more sprites to match the early prototype of the game. Specifically it changes:
- the BS-X boy avatar to the Link sprite made by Nintendo.
- the palette, to make Zelda and the shopkeeper look like their prototype versions (as a side effect, this also changes the color of the girl avatar's hair).
Take note that there are several versions, e.g., for MottZilla's patch and others for the other versions, with and without header (all roms and patches we offer are for headered!). Refer the attached readme file. 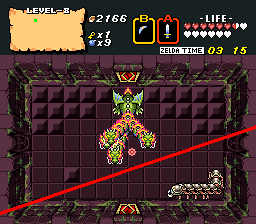 3, The Lanmola & Gleeok Patch by Con,
- Puts unused enemy Lanmola in Level 8, replacing a Dodongo rematch.
- Puts unused enemy Gleeok in Level 8, replacing an Aquamentus rematch.
- Ups the challenge further by making it mandatory to defeat all the intervening bosses.
- Available in both Hard and Easy versions.
Good luck, don't let them overwhelm you! Take note that the patch may not work correctly if applied to Mottzilla's version (and the new enemy certainly won't appear in Map 2). 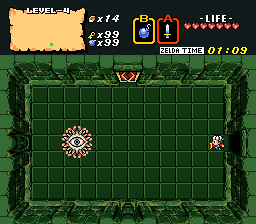 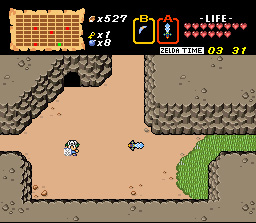 5, With this Soul Calibur II Magic Set patch by Duke Serkol and Dracul, BsZelda will
- feature the Magic items as they appear in Namco's game and the original LoZ's manual
Refer to the readme file to make the best of it. The new version (06/12/2008) features compatibility with the shield patch and the decoration patch. 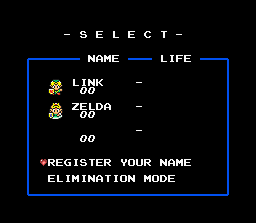 6, The Classic Sprite Patch by Con, based on patches by TeRRaBiT88 and Vel. It
- changes the mascot to newLink
- changes the girl mascot to Zelda (and rescue Zelda to slave Zelda)

Check the subfolders if you want only one mascot changed.

7, With this Triforce Tile Set patch by Con, it turns
- the Large Shield into the Hylian Shield
- the Book of Magic in the Book of Mudora
- the Magic Sword into the Master Sword
- and Triforce Symbols on the Gravestones
So all crosses get triforces. Use triforce_time.ips if you have applied the time patch, otherwise use the triforce_normal.ips. Oh, and the place of the book is of course faked. 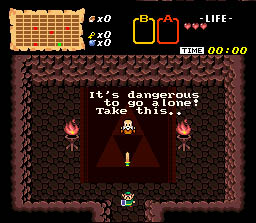 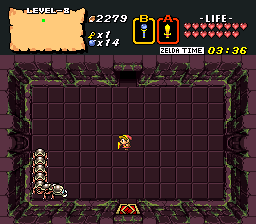 2, The Lanmola Patch by Con,
- Puts unused enemy Lanmola in Level 8, replacing a Dodongo rematch.
- Ups the challenge further by making it mandatory to defeat the Purple Manhandla.
Good luck, he's fast! Take note that the patch may not work correctly if applied to Mottzilla's version (and the new enemy certainly won't appear in Map 2). 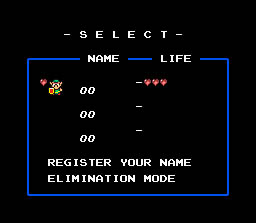 3, The Updated BsZelda Complete Link Patch by Duke Serkol. It
- changes the mascot to Link, also in the menu of Roto's BsZelda Complete and Decoration patch.
It's furthermore different from Damodred's as this merely changes the graphics without cracking the timer and Link's sprites are slightly different. Will work also with an unpatched rom. This is an updated version (12/05/2008). Check the subfolder for the old file. If you play with the decoration patch, please apply bslink_deco.ips to change Link as well in the beginning/ending screen and to display the correct ring in the menu. 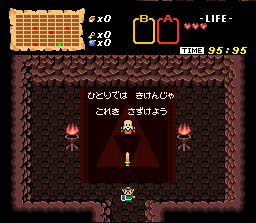 4, The Link patch by Damodred to
- play as Link
- crack the timer
(don`t use this and FloBBaSKo's patch together). 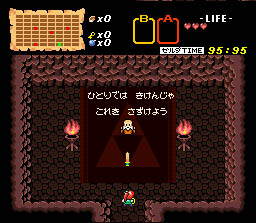 6, Here's the Girl patch by Pachuka to
- play as the girl mascot.

7, Here is the patch made by FloBBaSKo to
- stop the crash occurring after every 57 minutes

Full Game Playthrough
After the first video above, near the end of year 2007, recordings of the whole game were eventually found. Kiddo Cabusses used his YouTube account to upload them so now we can all see how the game would originally play (and most importantly sound, as the videos contain all the soundtrack and voice acting used in the game). They lack the introduction sequence though, so it is reccomended you view first part of the video above before watching these.

Intro and First Week
Here you may download a two parts video taken during the original broadcast of BS Zelda, the first part features the introduction of the game that was seen while it was loaded into the BS-X, and the second part shows the actual gameplay for the first week.

5, Download here an Editor that Roto made for the game. You may ask Bumpus if you have any questions on its usage.
6, BS-Zelda Tile Ripper Copyright © 1998-2000 Armageddon Games

Here you can download the music that we found in the internet which was used in the game (as heard in the video documentary). Thanks to FireBrandX (for remastering some tracks, KiddoCabbusses and joesteve1914 for finding them!


Here's the list of the tracks that are still missing. We hope to be able to remaster them soon to start with the Voice acting project:

A, Text Dump
Here you can download a txt file with the new Translation. Here's the old Translation from the game.

B, Midi File
If you finished the game, get this nifty midi of the game's final (obvious spoiler) made by MottZilla. It is the only music NOT remixed from the original Zelda1 (thus made specifically for this game).

C, Fonts
Here you may download all fonts used on this site. Copy them to /Windows/Fonts:
Genoa, Amazone BT, (my) Con's Handwriting, Lucida Handwriting, Old English and Comic Sans MS!

Which person or sword do you want to play with?