This page is for all users that wish to present their own theories concerning how to place the BS Zelda games into the existing Official Timeline.

Other than their exclusion from the chronology presented in Hyrule Historia, there is no official statement as to how the BS Zelda games should be placed within the timeline.
Concerning the first game, the scarce information we get from the story of BS The Legend of Zelda does not reveal much. Luckily the story of BS The Legend of Zelda: Ancient Stone Tablets indicates that the events in AST are happening at the same time as those in Link's Awakening.
In a desillusioned view, BS Zelda is nothing but a 16-bits remake of the original 8-bits game and therefore, in the Official Timeline, it was left vague what really may have happened... the premise is that for whatever reason Link wasn't there to rescue Zelda: maybe he is dead, Impa failed to find him or he was never born in this timeline at all... so it is left to the player to choose what to think!

But: who are the mascots? Do they represent the player from Earth himself? Is it the same Hero of Light in AST that also fights in BS Zelda? And most important: How is AST connected with the first BS Zelda?

For all who, like me (Con), are unsatisfied with the lack of concrete answers I decided to make this page in which speculations on such questions can be published! I'll start with my own that handle BS Zelda as a direct part of the canon.

Link is defeated before he was able to kill Ganon in original Zelda. The old man in the first cave (who maybe even is Aginah) remembers the Hero of Light that once saved Hyrule while Link was lost in his dream (AST). The Guiding Star takes the hero from earth to that time where Link once started his quest. To ensure the Hero won't fail like Link and is successful in the limited time in Hyrule the Guiding Star provides, he uses magic to aid him through the battle.
This theory is based on the assumption that (1) the mascots are the same in both Ancient Stone Tablets and BS Zelda and (2), AST takes place not long time before BS Zelda. Third assumption here is that the dimension portal can not only transfer the Hero through space, but also through time, exactly to the point where Link once started his quest but unfortunately failed.

After discussing this particular theory on how to fit BS Zelda within canon, JoeSteve1914 was so kind as to make a variation of his adapted timeline (the original may be found in the Official Timeline section) that shows how this fits in the overall series chronology (click on the image to enlarge): 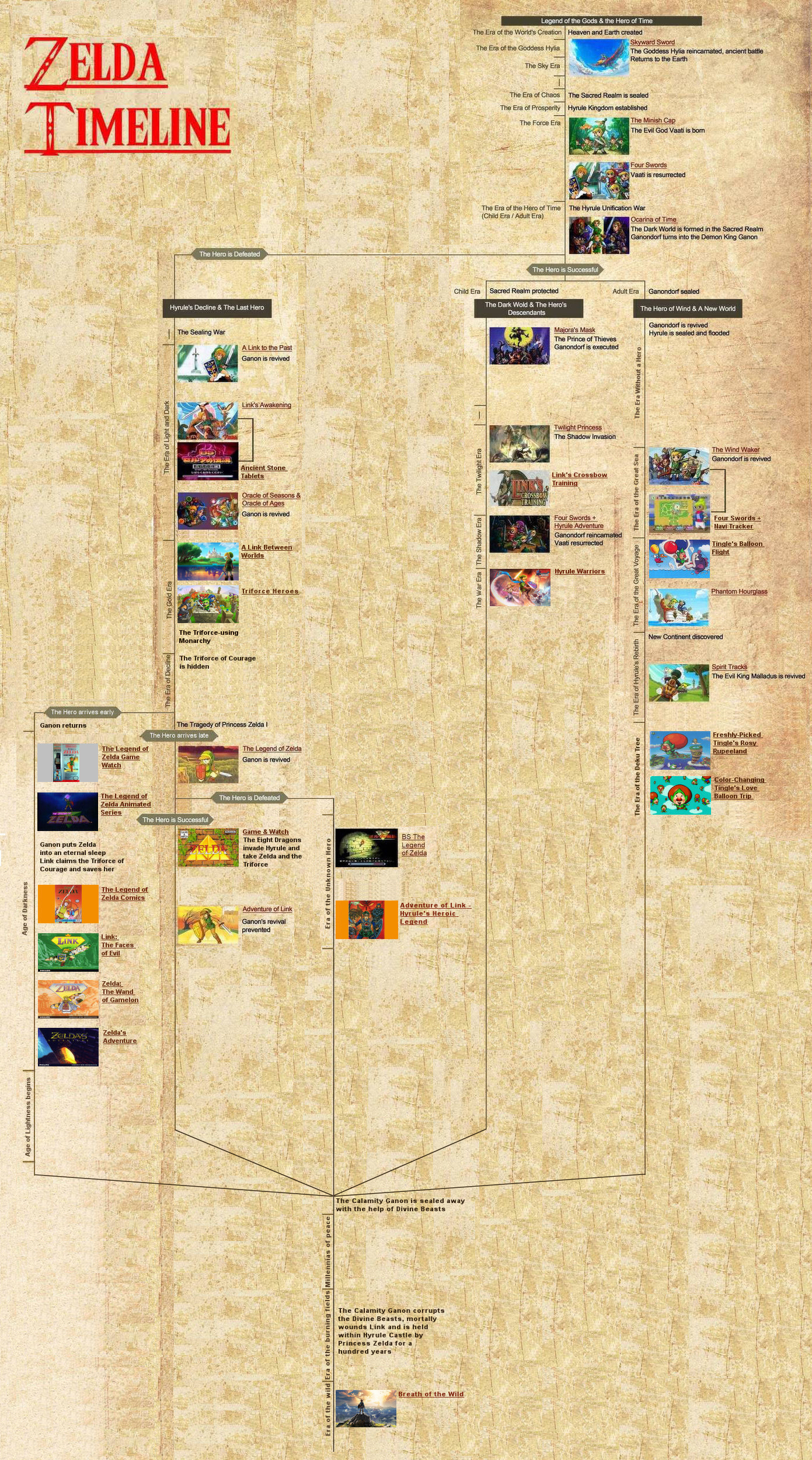 This image by JoeSteve1914 (originally by GlitterBerry and x7razorbackx7, edited by Con) shows the adapted timeline with all of the Zelda games (including BS Zelda and Ancient Stone Tablets, both as concrete part of the canon).

MikePetersSucks's Theory (paraphrased gratuitously from here, if the author would rather have it removed, please contact us)

In the first BS Zelda, the character you're playing as is experiencing a temporary, dreamlike world weaved by a fortune teller.

In BS LoZ the Fortune Teller has some of Ganon's minions hiding behind a curtain until the player "departs". There could be several reasons as to why.
If the quest was real, the fortune teller could be sending Ganon someone who can gather the Triforce for him (confident that he would then be able to defeat the kid and take it. Wouldn't be the first time Ganon allows the hero to do stuff because he's overconfident. In fact in AST it was Ganon that summoned the Hero of Light as part of a plan to revive himself).
However, if (as I believe) the quest is only an illusion, then an explanation could be that the fortune teller was trying to destroy the Hero of Light (perhaps by breaking their spirit) before the hero could embark on their real quest (Ancient Stone Tablets).
Naturally things didn't go accoring to plan and it ended up being a growing experience.

The strongest evidence that the game was just an illusion is that in BS LoZ the old man doesn't say, when time is almost up, that you will soon leave the world you're in, rather that it soon will disappear/vanish.
In fact the word used is Genkaku: "Hurry, or this Genkaku will fade away." Genkaku got translated as world because that's an alternate meaning, the other being illusion. The specific word being derived from Buddhism and its principle that reality is an illusion.

This would apply for the BS Legend of Zelda, while in Ancient Stone Tablets the same character is -actually- being transported to Hyrule.

Ancient Stone Tablets also implies it's the same hero seeing as the character you play as is an avatar representing you, the player, and the player shouldn't become a completely different and separate person between games.


Lexxi Aileron's Theory (paraphrased gratuitously from here, if the author would rather have it removed, please contact us)

In the first BS Zelda game, the Seal War is not being presented as a backstory to ALttP, but to LoZ.

It's generally thought that the reason ALttP's backstory is told in the introduction of BS LoZ is simply to provide background for the villain and the Triforce.
However, I find it somewhat ironic that it would use the backstory for ALttP as supplying Ganon's background while simultaneously completely ignoring the description of both the events taking place during ALttP and those of Ganon's invasion as told in LoZ's manual (and intro sequence if you wait on the title screen of the NES game), the very game it is a remake of.

Therefore, it could be that BS LoZ happens directly (without other games inbetween) after the Imprisoning War spoken of in ALttP's manual (either before ALttP or in a continuity that does not include ALttP).