Not long after the Legendary Hero had undertook his journey of enlightnement, Princess Zelda had a vision of a new threat to the land of Hyrule. The Triforce could evidently not be used for the one to whom it was now bound was away. But the vision also promised hope...

In a different world, a seemingly ordinary citizen of a modern city one day happened to meet a strange old man at the local temple. This man showed the youth inside his place but didn't follow in. The youth saw a strange colorful bee hovering above a crystal ball, and followed it as the bee went through the door in the back. Behind the curtain, the darkness of the room was suddenly pierced by a beam of light which enveloped both the youth and the bee.

It was then in Hyrule, that a mysterious light came down from the sky. The Princess and the wise Aginah went to investigate and found a youth passed out near the East Palace. 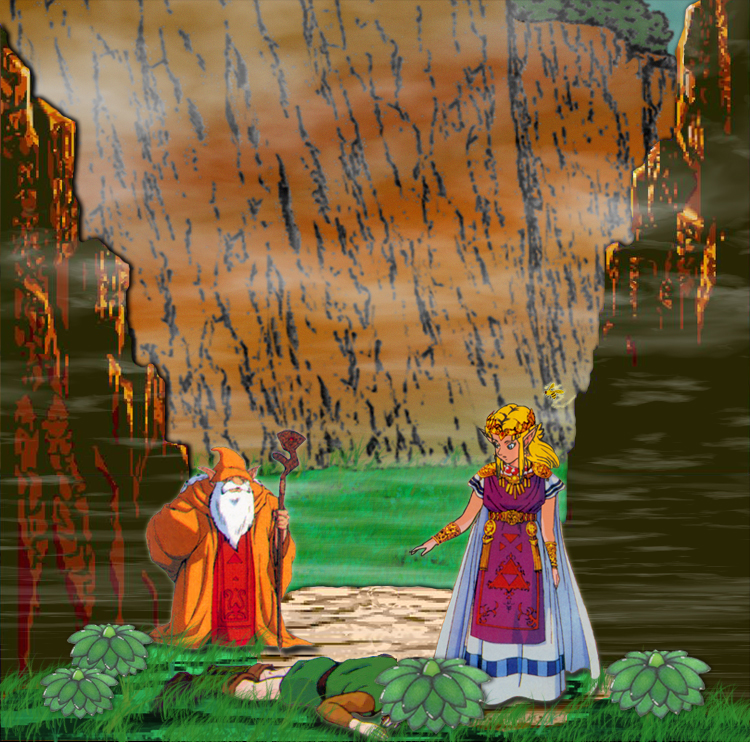 Aginah took the youth from another world with him to the vacated shelter of Sahasrahla (who had left Hyrule to seek Link, the hero), his older brother, and once the youth awoke Aginah explained that this was the land of Hyrule and that this world was in danger according to a prophecy of Princess Zelda. But that was not all, as her vision also had revealed that this child brought by a strange light would be the one to save the land.

Not knowing how to return home, the youth resolved to trust this prophecy and accepted the quest of recovering a stone tablet from the East Palace (where monsters suddenly appeared and attacked the guards stationed there after the youth's arrival in Hyrule). For protection, Aginah presented to the youth the friendly bee that had come along in the ray of light and it was much needed as many monsters roamed the area. In this quest the youth would also find a sword and other items to get equipped with, becoming a skillful fighter along the way. But also of assistence were Aginah and his Fortune Teller's friend telepathic advice, as well as the magic that Hyrule itself used to aid the young one.

Upon collecting the mysterious Ancient Stone Tablet, the youth was given directions by Aginah to find the next, and eventually succeeded in recovering this too. It was after this that the youth met Princess Zelda. The youth heard her cry for help through telepathy and found she was being chased by monsters, but for the one who recovered two Stone Tablets they were easy to dispatch. The princess expressed her thanks to her rescuer and spoke about her fears for Hyrule and her hopes, saying that she was now persuaded the youth was the Hero of Light, brought here to save Hyrule.

With the Sword of Evil's Bane in hand the Hero went on to brave Death Mountain together with Princess Zelda. There they obtained the last Stone Tablet and Zelda climbed up to the left of where the Tower of Hera once stood, determined to solve their riddle. Struggling with ancient runes, she eventually did: the Tablets were powerful artifacts that could serve many purposes. The fiend Ganon had in fact revived himself and was now planning to use them to restore his power to its peak. Indeed the concerns of Hyrules people were founded: once again Ganon lurked in his tower, preparing himself to conquer the world.

Time was quickly running out. Ganon had to be destroyed now or it would be too late. Fortunately the Ancient Stone Tablets could also be used to open a sealed gateway (all the other Warp Panels that Link used in his quest had vanished) into what was once the Golden Land, where Ganon resided. Zelda then summoned the Silver Arrows and entrusted them to the Hero together with her knowledge of Ganon's strenghts and weaknesses. Armed with such knowledge and power, the Hero courageously entered the the other world. The barrier of Ganon's Tower was easily pierced by the Master Sword and soon nothing stood between the two enemies. Ganon jeered and swore to take the Tablets for himself but the Hero of Light after an ardous battle managed to slay the Evil King.

Upon returning, the Hero received the heartfelt thanks of Princess Zelda and Aginah. The three then made their way to the Master Sword's resting place. There, as soon as the sword was returned to its pedestal and the hero's destiny fulfilled, the latter was again enveloped in light and in a flash was returned home.

Some legends seem to claim that this mysterious hero appeared again, centuries later to aid Link the Hero of Hyrule in his quest to gather the fragments of the Triforce of Wisdom. The legends go as far as to claim that on said occasion this hero entered the world of Hyrule for the first time, thus helping to save the future first and then the past; but no proof is left to back up such myths.